Showing posts from October, 2011
Show all

October 31, 2011
It would have been nice to have seen that sentence somewhere before.  But, no.  I have to troubleshoot the issue myself.  Figure out what I changed.  Walk back the track.

I know, I know.  Oracle would point a slim, sushi fed finger right at Microsoft and its myopic home network hegemony.   Microsoft would point it right back at Oracle and say, what?  You couldn't figure out how to implement our nearly undocumented API?  What idiots!

Seriously,  screw you guys.  I'm just trying to live five minutes in the future here, and both of you fat fuckers are harshing my buzz.    But yeah...  The free software was the loser.  I just uninstalled it and I'll do my alternate OS experimentation on my Mac.  You know - where we go to do real work.

And Xbox, it wasn't your fault.  You were doing exactly what you were supposed to do.  Which is way more than I can say for that glorified Blu-Ray-drive-slash-boat-anchor that Sony made that sits next to you that calls itself a gaming stat…
Post a Comment
Read more

I woke up ready to write.

October 24, 2011
That was about 5 AM.  Then, I went back to sleep.  I haven't really been able to get it back.  I'm just distracted.  The novel is going to seep out, it just doesn't want to come out in order, nor does it seem to want to come out at a decent hour. (Which will be fine once I start working a "day-job" again.)  Right now it's just frustrating.  I feel like my narrative is teasing me.
Maybe I should just try writing it out of order...
Post a Comment
Read more

Walls are expensive, but you can help. 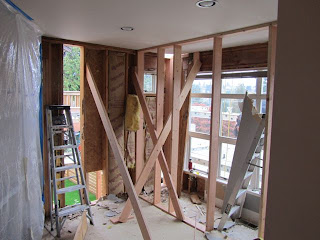 This is going to be expensive.
So...

Shh... It's a secret to everybody.

October 06, 2011
I was enjoying a latte and doing email in my favorite downtown cafe when I see this ill-matched couple take a seat at the end of the big table with their drinks.  An older man in his sixties, and a woman in her thirties are taking turns scanning the place and fiddling with their cell phones.  Neither fit the mold of professionals or hipsters who usually frequent the place.  Soon a younger man with an ironic baseball cap sits down and joins them with their coffees.  The woman says"Hi" to me from the other end of the long table.  At first glance they look to me like they belong in L.A. instead of Seattle.  The woman is wearing designer jeans with inappropriate bagginess and has an unrealistically optimistic but freshly-colored bottle redhead job happening.  I can't help but notice.  I start doing my "author" thing and try to make up a story for why they are here in the coffee shop, but nothing is coming.  A client meeting, maybe?   I pick up a snippet of conversa…
Post a Comment
Read more
More posts